David B and his recumbent exercise bike laptop welding project: David sent in another great welding and metalworking project. Here is his first submission - How To Build A Gas Fire Pit.

And now let me introduce David B and his step by step guide on how to build a computer exercise bike on his recumbent bicycle.

Step 1: Since there is never enough time in the day, I'm always trying to find ways of combining my interests to save time and accomplish more (an old age thing). I've lost over 100 pounds over the past few years and want to keep it off now, but I have way too many interests, hobbies, chores, tasks, honey-do's, etc. I've been wanting to build a computer table for my stationary recumbent bicycle so I could read, work, and exercise at the same time. 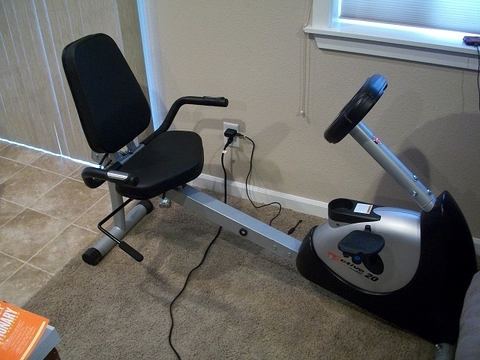 Here is my first attempt at a laptop holder part of my computer exercise bike project. I am just getting it done so I could at least combine my needs into one activity. I used a TV dinner tray to place on top of it, and then the laptop on top of the TV dinner tray. Worked just fine but it was ugly, obtrusive and the wife complained it made her living room look cheap. 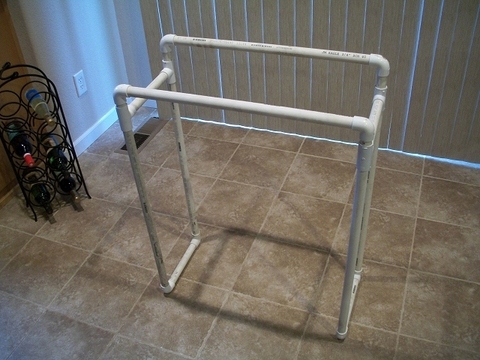 Step 2: I decided to make a better stand and here is how I did it... I wanted it to be simple and work. The wife demanded that she be able to see the controller unit when she uses the bicycle so I had to make it removable. I looked in the garage and found some scrap from previous projects and thought, I can do this! I started off with some angle iron for the base. I cut a couple of pieces about 4 or 5 inches long (eyeballed how much I needed). Then went in to the exercise bike to see if I had to add, subtract or start over. 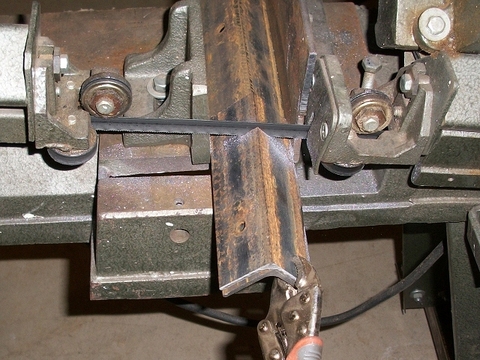 Step 3: I've placed the angle iron on top of the center bar and I have quite a big gap between the two pieces and the tube. So, I gotta cut some off. Also, note the cut to my hand. I haven't even started this little project and I've already injured myself. Power tools, and I don't play well together. 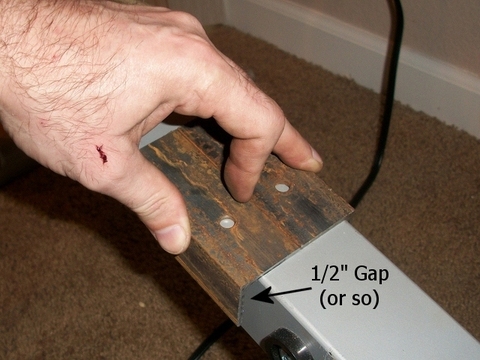 Step 4: I overlapped the two angle iron pieces and scribed a line to show how much I needed to cut off of one piece to make a perfect fit. I set it up in the band saw and removed what wasn't needed.

Another note: I get my metal from a local scrap yard, $0.50 / pound so it comes covered in surface rust, has holes and other stuff that are not so desirable, but it's cheap and works. 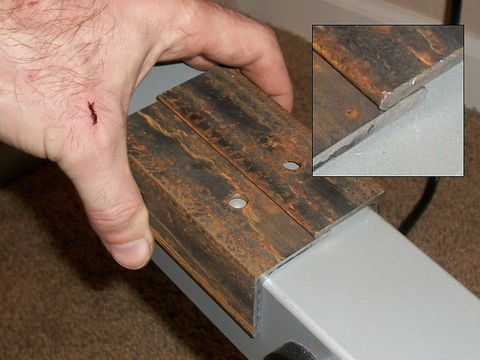 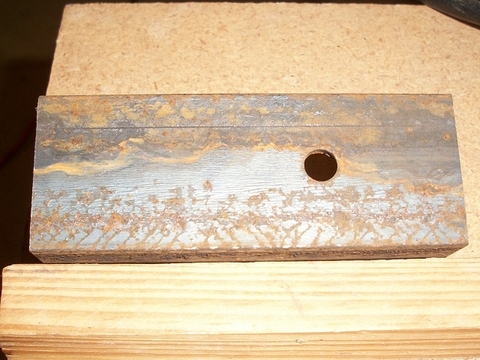 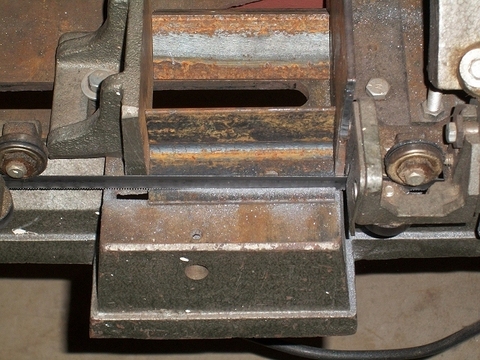 Step 5: Once I had it cut to the sizes I needed, I (quadruple) measured the distance and then tacked it up to see how the fit was on the bicycle. 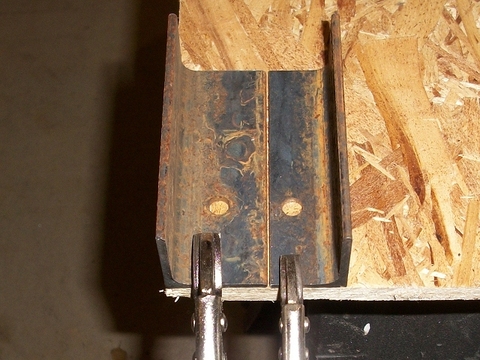 Once I learned I was spot on, I welded it up and cleaned up the welds on top and below the bracket - PERFECTO! 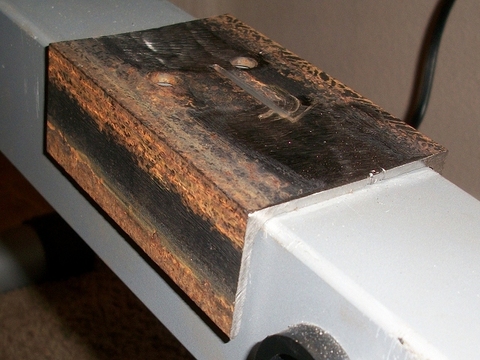 Step 6: I didn't weld all the way across the whole piece as I didn't see a need to do so, and I didn't want to risk distorting/warping it too much as my fit was tight. Here you can see I also filled one of the holes (that would have been visible). The tube I used on top covers the center strip and pre-drilled hole, so I only filled the one. 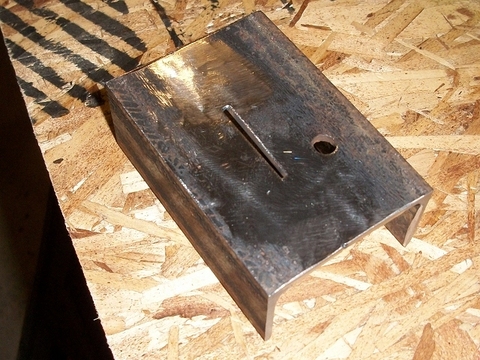 I measured the angle needed (again by eyeballing) and cut the tube to length. I also had to meet the bosses demands and make it removable so she could see the controller screen. So here I'm cutting the pipe partially up the tube to be make the top/table removable. 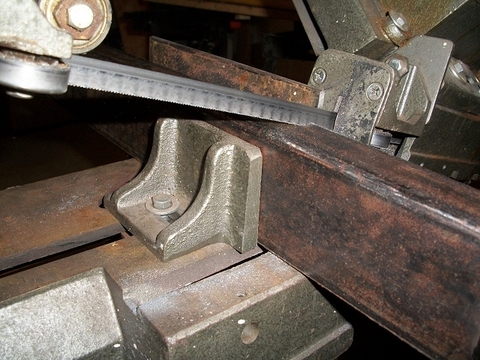 Step 7: While the above cut was being made, I went back out to the computer exercise bike and measured where the bolts were securing the seat tube to the main machine and marked it on the base bracket. I placed a piece of scrap (donor) wood below it to keep the benchmate still usable after I was done drilling (I sometimes forget these little things). 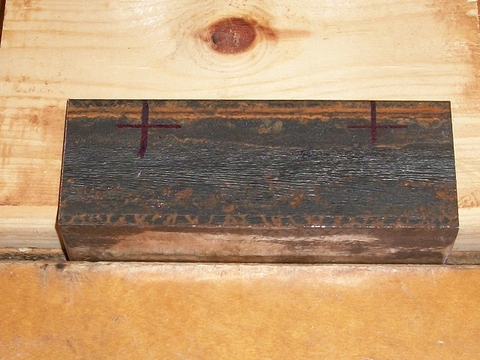 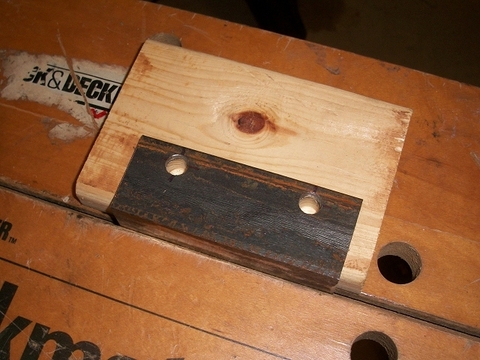 Step 8: After completing the drilling on both sides, I cut the holes open to make it so I could completely remove the table stand relatively easily if the wife didn't like the way I split the tube for her visibility. So I removed the metal to make it easier to install and remove just by loosening the bolts. Gotta make sure the boss remains happy! 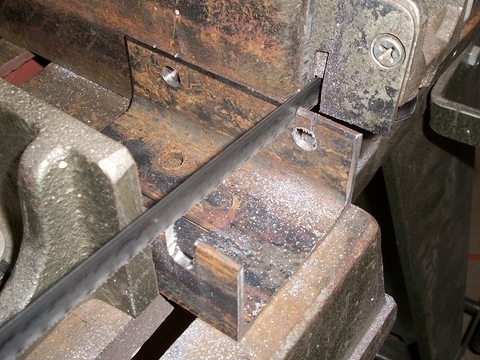 Step 9: Once the holes were completed I welded just the front and back of the tube on top of the base. I didn't think the whole based needed to be welded to the support tube and in case I made it too short and banged my knees on the bottom, I could remove the base bracket from the support tube a lot easier and redo what needed to be done. 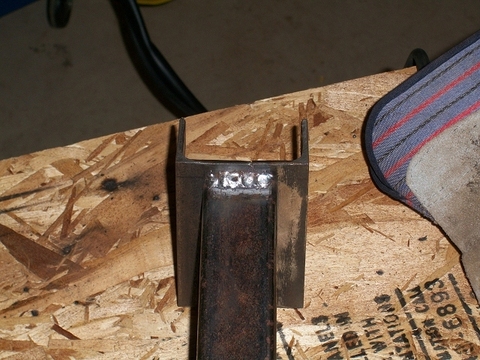 Step 10: I got ahead of myself and forgot to take a few pictures. This is the top (removable part) of the support tube. I placed the rods into the inside corners of the tube to hold it in place securely. The top table support, I repeat tack welded the thin angle iron on the sides to support the table top. I repeat tack welded the base and tops to give it plenty of support. I also placed the angle iron lengthwise instead of width-wise to avoid hitting them with my knees while pedaling. 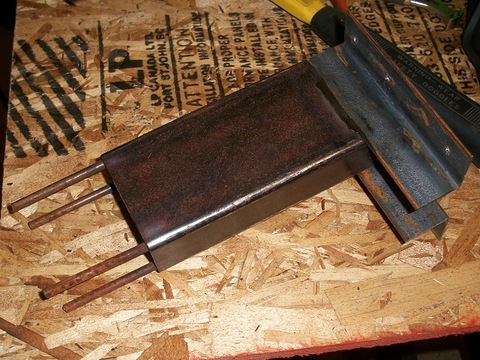 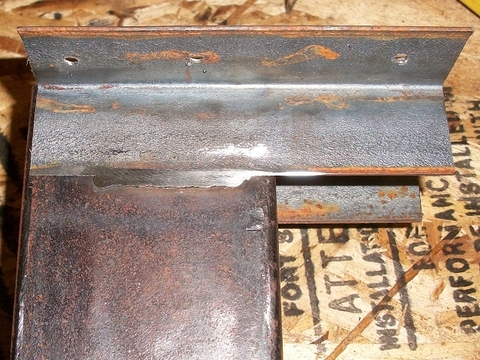 Step 11: A nice tight fit on the slip joint which makes the computer controller completely visible to the "boss" when she wants to use the machine by removing the top table. 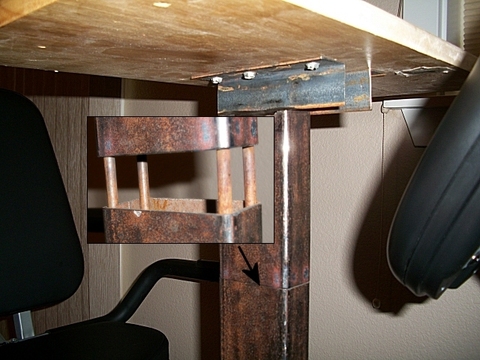 Step 12: Here is the final result of my exercise bike laptop holder. Took me a good few hours to put it together and after fighting with the power tools (starting a few small fires with the welder) and losing all the battles, it works perfectly. The boss said she can use the controller, I can read my java tutorials and practice writing programs, and workout all at the same time. All that needs to be done now is a good media blast, and paint to match the bicycle frames! Have fun, make mods, and let me know what you think! 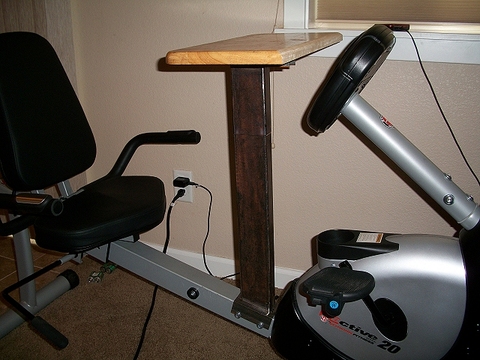 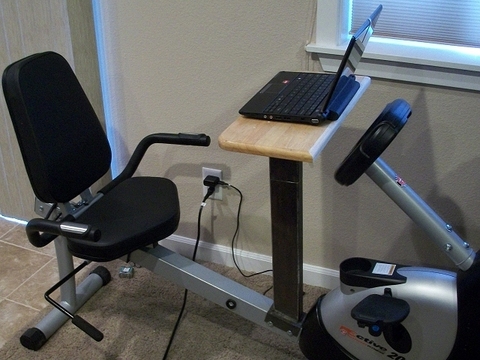 Side Note: The rods are just guides and supports to hold it in place. so it can be removed for viewing the computer control unit.

As for the use of such "strong" steel for the project, it was left over material from another project and was readily available for this project. So, I didn't have to go the steel yard and search for what was needed, I just grabbed the leftover from it and made this one.