Soldering and Brazing Advantages and Disadvantages! 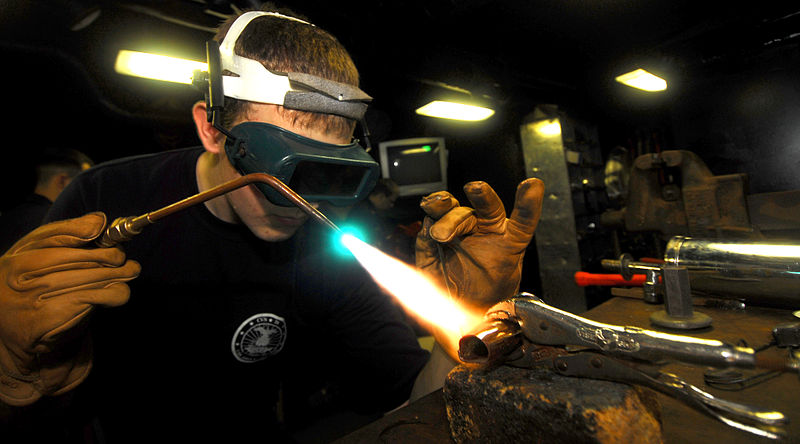 I could spend a lot of time on brazing, braze welding, and fusion welding but for purposes of being pithy I'll keep it as simple as possible. I'm also going to include soldering, because it's similar to brazing.

As the molten metal cools, the pieces are fused together. With proper technique, the joint will have the same strength as the base metals. In theory, nearly all metals can be oxy-acetylene welded. In practice, it really only works well on thinner gauge carbon steel and some steel alloys. The design of the joint, the strength of the joint and the amount of heat applied to the base metals are important factors.

With the adhesion processes (soldering brazing, and braze welding) the pieces being joined are not melted, and that’s important. The base metals are only heated to a temperature that will allow a non ferrous filler metal to melt, flow, and bond to the surface.

On many metals, adhesion does not produce as strong a connection as fusion welding. However, in some situations, there are advantages in using these processes. Because of the lower temperatures, soldering, brazing, and braze welding produce less distortion of the base metals, and less residual stress in the finished joint. Another advantage is joining dissimilar metals. 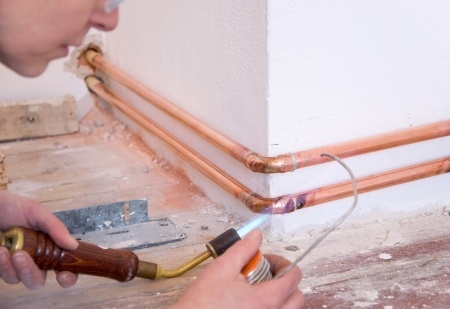 Many of the terms that are commonly used for soldering and brazing can be misleading, even confusing. For example, what’s often referred to as silver soldering is technically brazing. Soft solder is solder, an alloy of lead, tin or zinc. Hard solder is really a brazing filler metal, usually a copper or silver alloy.

Because a lot of “non standard” terms are used, it’s important to understand the characteristics of the different processes, and while there are many similarities in Soldering, Brazing, and Braze Welding, the main differences are the melting temperature of the filler metal, and how the filler metal is deposited into the joint.

By definition, Soldering is a process of joining metals by heating them to a suitable temperature and using a filler metal that becomes completely fluid at a temperature below 840 degrees F. The filler metal is distributed between closely fitted surfaces of the joint by capillary attraction. Soldering provides a permanent, structural, and water tight bond at relatively low temperatures.

Brazing is nearly identical to soldering, except for the melting temperature of the filler metal. Brazing is defined as a process of joining metals by heating them to a suitable temperature and using a filler metal that becomes completely fluid at a temperature above 840 degrees F.

Here again, the filler metal is distributed between closely fitted surfaces by capillary attraction. Because of the types of filler metal, brazing produces a stronger joint than soldering and is commonly used in plumbing, heating and air conditioning, and refrigeration. It’s also used extensively in the automotive, aircraft, and aerospace industries. Many of the newer high alloy metals that are difficult to weld can be successfully brazed.

With both soldering and brazing, the pieces being joint can also be tinned (a thin layer of filler metal applied to each surface, cleaned, fluxed, and lightly clamped together, then heated until the filler metal flows together). I added some support for my tail light on the bottom side of my motorcycle fender using this technique. Basically you can permanently stick to pieces of metal together.

Important factors for brazing and soldering are the base metals, amount of heat, and most critical is joint design and fit up. The strength of the connection is determined by the amount of surface being joined (picture a copper tubing connection). Pieces of 1/8th metal that are butted up and soldered or brazed would not be very strong because there isn't much surface area. If two pieces of 1/8th material are lapped (with around one and a half thousands gap), soldering or brazing can produce an extremely strong connection.

For braze welding, the joint is prepared similar to a fusion weld (bevels or fillets). The base metals are not melted, only heated until a non ferrous filler metal, typically a brass alloy, will melt, flow and adhere. This process can be used to join dissimilar metals and is often used to repair cast iron when the strength of the joint is not critical. Joint strength is determined by the amount and type of filler metal.

One more important thing to consider is the sustained operating temperature. If it's above 200 degrees for solder, or 400 degrees for brazing, the elements in the filler metal can migrate and will eventually weaken the connection.

When it comes to brazing sliver and aluminum, the flux and filler metal will be different for aluminum, but the technique is the same.

Aluminum is a little more difficult to braze. If I remember correctly, the filler metal melting temperature is very close to the melting temperature of the aluminum base metal. The problem is that aluminum "moves" a lot when it's heated, and it's difficult to hold the pieces in place. For brazing, you want to maintain a narrow gap and the pieces can't move until the filler metal solidifies.