What is forge welding? Basically it's where heat is generated, usually using coal or gas as the heat source, and then the metals are joined using pressure (hammering) to bind the metals together.

Forging is also known as blacksmithing and it's very cool. I really enjoy this ancient welding technique.

The main tool used in forging is a portable or stationary forge.

These days a portable forge is ideal for forge welding because you never know if you have to move your location. Imagine if you build a stationary or fixed location forge at your house and then you had to remodel or move. All that hard work was for not.

The good news is that a portable forge is just as good as a fixed or stationary forge, maybe better.

The main parts of a typical forge are:

You can see what a portable forge and it's parts looks like below. 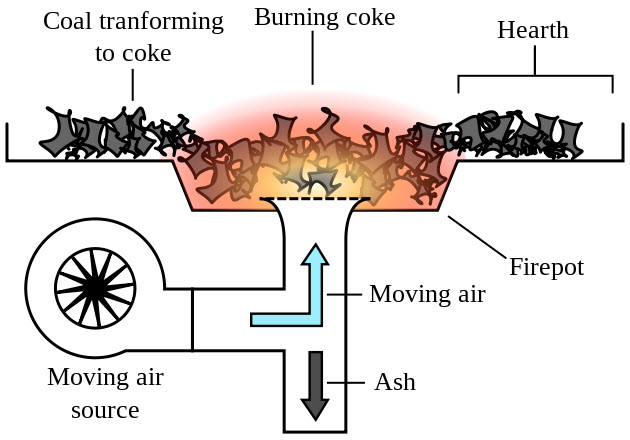 A forge is mainly constructed out of cast iron. As described above the Tuyere directs air into the fire to make the fire more hot.

The main parts of a Forge consists of the fire pot and a base. Attached to the base will be an air inlet, an air blast valve, and ash gate.

You create an air blast using by allowing it to pass through the base using a valve. Typically an air blast valve will have 3 positions you can choose to adjust the air blast direction into the fire as well as the size of the air blast. Usually the valve has a handle with can be used to get ashes out of it.

Many portable forges have a blower that is manually operated using a hand crank. But many more have an electric blower.

Most portable forges have a hood that is designed to disperse fumes and/or smoke away from the work or basin area.

The amount of pressure a blower can produce is approximately 2 ounces per square foot.

Side Bar: The Enemy!

Flux is used to keep the metals from oxidizing as you weld them together. If your metal oxidizes then you will have a bad weld. Borax is a common type of flux that blacksmiths use.

Sometimes other material is mixed in with the borax. You simply sprinkle the flux on your metal as you are forging and it then removes scale from your metal by liquifying it.

You don't want scale (a gray material the forms on your metal during the heating process as a result of oxygen being present) because it will destroy your weld by weakening it. It's the enemy!

You want to clear the areas you are forge welding together of any scale by applying the flux which basically protects these areas from oxidation and therefore insures a good weld. 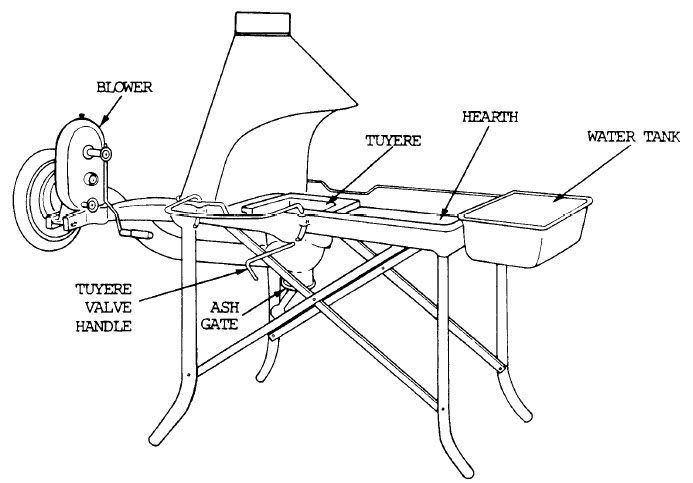 The forge below is a modern day portable forge custom built by Ben Wright. 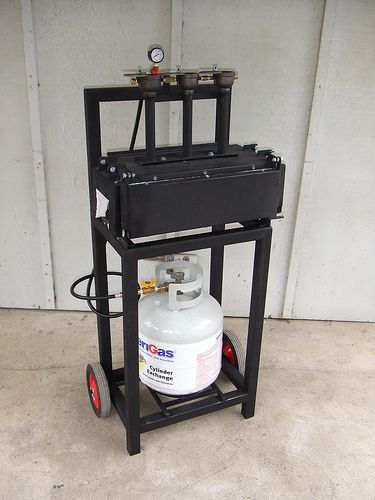 Forge welding in a fixed location uses a stationary forge and it has many similarities to a portable one.

The main difference is that the stationary forge is bigger and therefore the parts of it including the exhaust and air units are larger.

The stationary forge air blast valve has 3 settings with individual slots which the valve controls. You adjust the size of the air blast and therefore the fire by opening each of the slots. 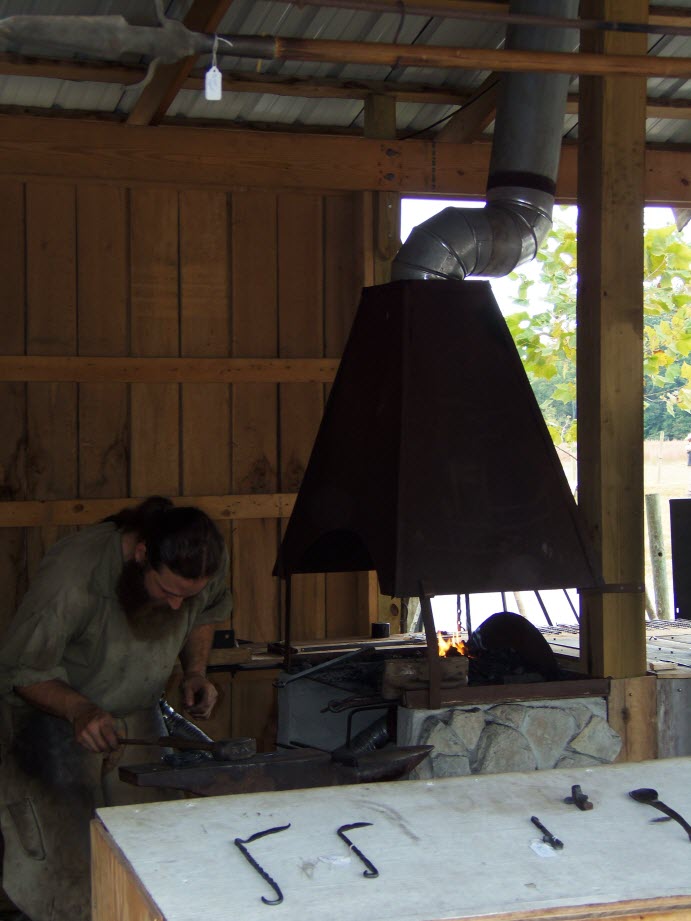 There Are Two Types of Stationary Forges and Portable Forges: 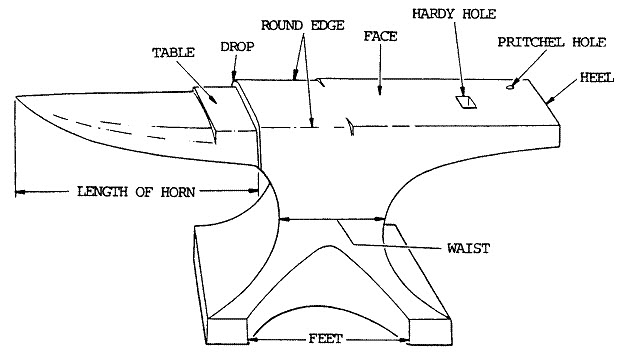 The main tool used in forge welding is the anvil. An anvil is not one piece of forged steel. It is made from two parts of casted steel which are welded at the 'waist'.

Part of the anvil called the cutting block or table is softer than the rest of the anvil. It is soft so that metal tools such as chisels or cutters are less likely to become dull from working on this surface.

Conversely, the area called the face is made of a tempered and hardened steel and it is separately welded onto the anvil. You can hammer all you want on the face and it will not get damaged. 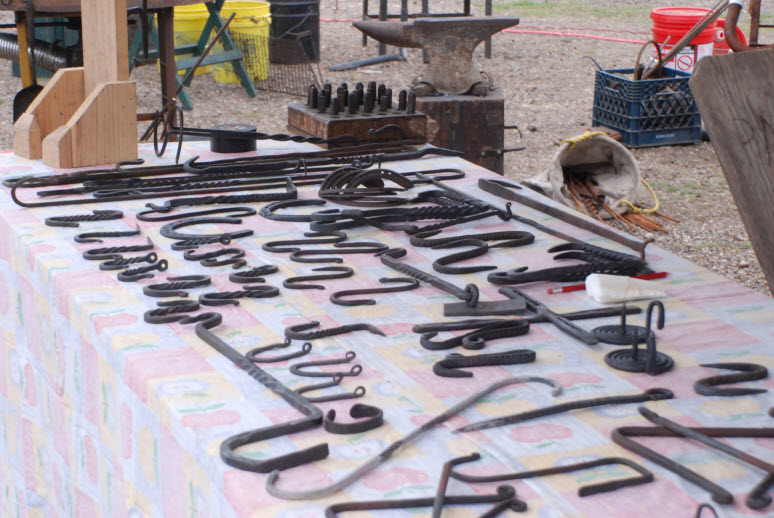 An anvil has a part designated with rounded edges that are approximately four inches from the table. They are rounded so that you can shape and bend metal accordingly. If the edges are not rounded then you have a terribly constructed anvil and you run a high risk of damaging your material.

No other edges are rounded on an anvil. The rest are sharper so that you can actually cut your piece as you hammer it on these edges.

The hardie hole is the most interesting area on an anvil and it might me the most useful area as well.

This hole in the anvil called the Pritchel hole is there to allow for the punching of holes so that the metal slugs can fall through it. 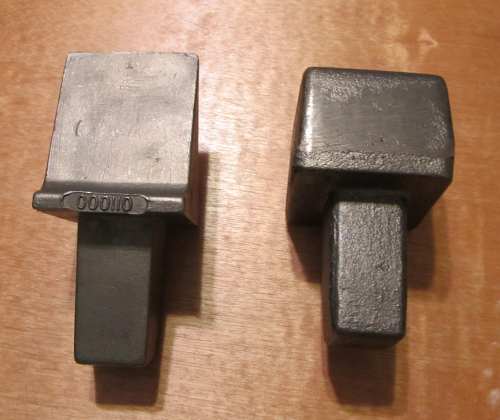 This image is courtesy of Storm The Castle.

The image above shows a cutoff hardie tool and a swage hardie tool. As described above they are placed in the Hardie hole when needed...

When you buy an anvil there is not one size or weight. They come in all kinds of sizes but they are usually identified by their actual weight. For example they usually range in size from 100 pounds to 300 pounds.

The hand tools used in hand forge welding or blacksmithing are many. Some of them are listed here: